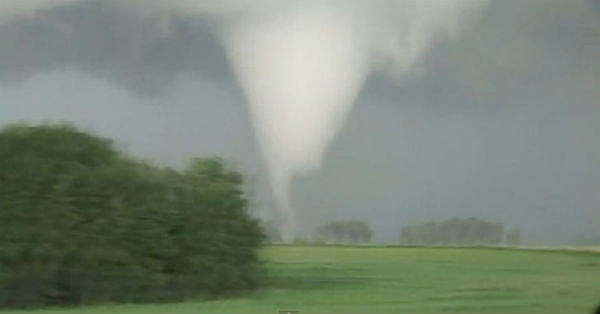 I believe that we West Texans are lucky. Lucky because we haven't been hit by a major loss of life storm. Like the 1987 tornado that killed 30 and injured 121 of the 297 residents in the small West Texas town of Saragosa. If fact the only three fatalities in Taylor County that were caused by weather, all happened in separate storms decades apart. In 1985 one death caused by a tornado, in 1993 high wind claimed another and in the flash flood of 2007 claimed yet another. From 1950 to current date, in Taylor County alone, there have been 767 severe weather events causing over 110 million dollars in property damage and over 237 million dollars in crop damage. And the numbers keep climbing, because the official numbers from the April 2011 storms are not all in. Let's look at our "Worst Storms" by the sheer dollars in damage. 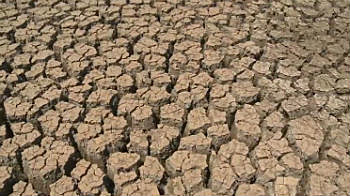 While Texas is setting records every day with triple digit temperatures, many local churches are asking parishioners to pray for rain. State Governor Rick Perry even proclaimed a three-day period as Days of Prayer for Rain in the State of Texas. Droughts have had an iron fist grip on the western portions of the Lone Star State. Taylor County has had three major droughts in recent history, 1998, 2000 and 2011. It's estimated to have cost farmers and ranchers over 235 million dollars, and this years totals will not be in, until years end. The devastating drought of 1998 that began when little or no rain fell during the normally wet spring months and continued through the end of summer. The two main crops across Taylor County, wheat and cotton, were both near total losses, with additional losses to the cattle, sheep, and goat industries. Preliminary loss figures total over 150 million dollars.
Check out this video the shows the droughts devestation. 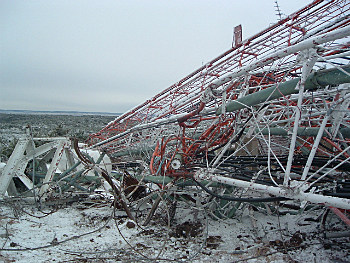 The Big Chill Freezes All Of West Texas

An arctic cold front moved into the panhandle of Texas on the afternoon of February 8th 1994, causing temperatures to drop 60 degrees in some areas within 48 hours. Up to four inches of ice and sleet accumulated, making this the most significant winter storm across Texas in years. Numerous highways, businesses, schools and governmental offices were closed. Over 30,000 homes suffered power outages, and damage from falling trees was widespread to homes and businesses. This ice storm was so powerful it brought down the NOAA Weather Service antenna tower. Two indirect fatalities also occurred as icy roads caused traffic accidents. The ice storm of 1994 caused more than 50 million dollars damage to vehicles and property. The winter storm earlier this year brought with it a variety of weather like thunder snow, thunder sleet, freezing rain, pea size hail, and locally heavy rainfall across a large part of West Central Texas. This winter storm resulted in power outages and numerous school closings. Schools were closed for several days in the Abilene area. Roads were very hazardous for several days and made it difficult for travel between February 1 and the 4th 2011. The high winds also produced near whiteout conditions during the early morning hours. Because of the prolonged bitter cold temperatures, there were many reports of busted water pipes across the region. Trying to get to work was an impossibility.
Check out this video of an icy intersection and cars crashing. 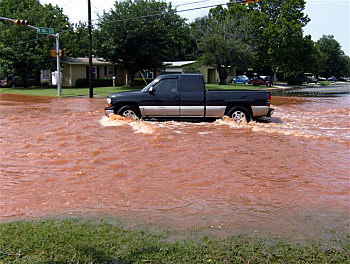 Flash Flooding has taken it's toll on the Big Country. Flooding alone has caused over 30 million dollars in property damage, and the totals for crop damage, come in just under 5 million dollars. the costliest flood occurred July 6th 2002. this flood cause over 15 million dollars in damage. It started as a tropical wave in south central Texas that moved north on into Taylor county around 3 AM on the 6th. Rainfall rates of 2 to 3 inches per hour produced rainfall amounts of up to 12 inches in the southern portions of Taylor county. A fire station on the south side of Abilene reported 5.2 inches of rain in less than 2 hours. The automated weather station at the Abilene airport reported 4 inches in 2 hours. The flooding throughout the county resulted in significant property damage with 31 homes destroyed, 339 receiving major damage, and 322 received minor damage. The tropical wave peaked in intensity during the early morning hours. However, numerous other thunderstorms developed across sections of Coleman and Brown Counties and into southern Callahan County, then spread west into the Abilene area. These new storms produced rainfall amounts of 10 to 14 more inches, adding to the already soaked creeks and lakes. Abilene received significant damage as the result of the heavy rains. 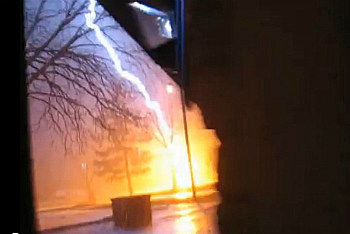 Baseball Sized, Hail To The Thunderstorms

I thought I would never in my lifetime see "baseball size hail" but it appears that it's becoming more prevalent. Baseball size hail hammered Abilene and i know you think I'm describing the severe thunderstorm of April 2011. That is not the case, the worst severe thunderstorm containing hail, was in May of 2001. That storm cost West Texans just over 4 million dollars in vehicle and property damage. Abilene Christian University seemed to be the hardest hit, with numerous windows broken out on campus. Many vehicles were damaged as well, with windshields broken out and holes punched through the roofs of convertibles. Scattered severe storms pounded the Big Country with hail up to baseball size. The hardest hit area was across the east side of Abilene, where significant damage was reported. This same storm also produced golf ball size hail along a path from near Hawley in Jones County south through Abilene to Potosi in eastern Taylor County. Golf ball size hail was also reported in Sweetwater, Roby, and Rotan. For the record the storm of 2001 produced 2.75 inch hail. The storm of 1996 produced 3.01 inch hail. The storm of February 2005 produced 4.25 inch hail and the most recent storm from April 2011 produced, the official word is 4.50 inch size hail.
Watch this video on the baseball size hail and the damage it causes this car. 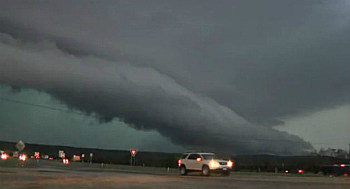 Tornadoes Are Just Blowing In The Wind

There has been, and still is, a lot of controversy as to whether it was a tornado or high winds that raced through our parking lot a couple months back. According to the National Oceanic Atmospheric Administration, there have only been a hand full of tornadoes in Abilene proper. As for the rest they were, really high winds. So both sides of the argument win. Nonetheless, over 17.7 million dollars damage has been caused by, both tornadoes and the wind. Tornadoes account for only 5 million dollars in destruction, the over 12 million dollars remaining goes to the wind. Winds estimated at 105 mph did extensive damage across Dyess AFB. Several buildings and 3 airplanes were severely damaged by the 100 mile plus winds. Scattered severe thunderstorms raced across the Big Country during the evening of July 12th 1998. The strongest storm moved in from Trent and Tye to Abilene, where winds over 100 mph ripped off roofs and downed power poles. Dyess Air Force Base took the brunt of the storm, with damage to buildings and airplanes totaling over 3 million dollars. The two most damaging tornadoes in Abilene were in 1976 and 1982 each caused 2.5 million dollars in damages totaling 5 million dollars. However, by the looks of the most recent videos, it appears tornadoes are coming more frequently.