This weekend, finally, the real refs will be back on the sidelines, saving us from any further on-field debacles like the ending to last Monday Night's Packers-Seahawks game. For all the phantom pass-interference calls and overlong instant-replay reviews, certain moments are sure to stick out when, in future years, we look back on the first three weeks of the 2012 season and wonder just what the world happened.

Here are eight dubious ways for us all to remember the stand-ins responsible for imprinting the phrase "simultaneous catch" onto every football fan's brain:

THE NFL HIRED OFFICALS THAT THe LFL Fired for Incompetence

The Lingerie Football League is not without its merits, but it isn't exactly a paragon of football excellence. Still, league officials were reportedly so concerned about the incompetence of some of their officials that they chose to fire them rather than risk "the credibility of [their] game." Meanwhile, the unsuspecting National Football League proceeded to hire these very same officials to oversee their nationally televised, brutally physical games. We're thinking Mr. Goodell didn't do his homework on this one.

For obvious reasons, NFL officials are expected to refrain from showing any sort of rooting interest for specific football teams. Somebody should have passed that little tidbit along to Brian Stropolo, a would-be replacement side judge. The New Orleans native was assigned to work the Week 1 showdown between the Saints and the Carolina Panthers, despite the fact that he was a lifelong fan of his hometown team. Stropolo's public Facebook page was littered with Saints references, and he even went as far as to express his excitement about calling the game. Luckily, the NFL realized its mistake and replaced Stropolo just before a scandal could develop.

Just about every fantasy football owner has daydreamed about the possibility of manipulating an NFL game so that one of their players could score more points. Apparently, one of the league's replacement referees was considering making that dream a reality. According to Philadelphia Eagles running back LeSean McCoy, one of the new zebras came up to him before a game and said, "McCoy, come on, I need you for my fantasy." McCoy later clarified that the ref was kidding, but the situation was just sketchy enough to make every football fan a little uncomfortable (or jealous).

Betting on professional football is risky enough as it is, and the NFL's new officials didn't make matters any better. According to several reports, the botched call on the game's wild final play affected over $300 million worth of worldwide bets. If the league hadn't settled its dispute with the referees soon, gamblers would have been better off switching to blackjack.

The NFL Received Over 70,000 Voicemails On Monday Night

The social media universe went absolutely berserk in the aftermath of the Packers-Seahawks officiating disaster, but it wasn't the only method of communication hit with an overload. According to various sources, the NFL league office received a over 70,000 voicemails in reference to the replacement referees' botched handling of the game's conclusion. We're guessing that most of those voicemails involved some colorful language, and that about 69,688 of them were from Green Bay head coach Mike McCarthy.

The ongoing struggles of the NFL's replacement officials became such a big story that even the Leader of the Free World decided to chime in. President Barack Obama took a break from his campaign, various international crises, and economic issues to tweet the following statement:

NFL fans on both sides of the aisle hope the refs' lockout is settled soon. -bo"

One Replacement Official was a Division I Softball Umpire

The current batch of replacement officials is rife with strange qualifications and professional backgrounds, but none has taken a stranger path than Larry Babcock. First, he's just 30 years old, having graduated from Wheeler (Indiana) High School in 2000. Even more interesting, Babcock's highest prior level of officiating came as a Division I college softball umpire. We're not doubting Babcock's knowledge of the game—he has officiated football at the Division III level and wouldn't have been hired if he didn't have some idea of what he's doing. Still, it's not every day that a softball ump switches to the professional gridiron.

SHANNON EASTIN IS THE FIRST FEMALE REFEREE IN NFL HISTORY 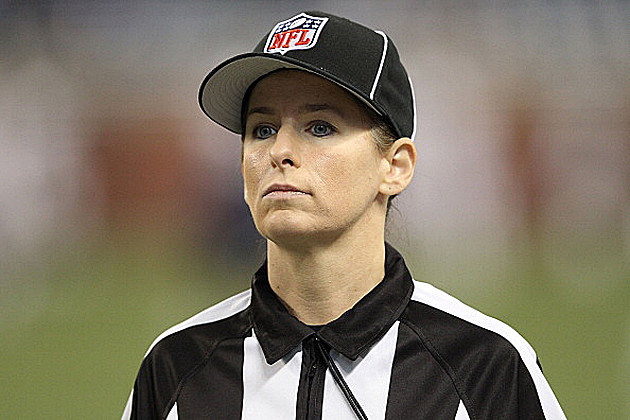 Okay, this one's actually not a bad thing to remember at all. Lost in all the vitriolic rants and chest-thumping is one of the sport's truly great stories. Shannon Eastin became the first woman in league history to officiate a preseason game, then proceeded to break the regular-season barrier as well. The Worchester, Massachusetts, native worked as a line judge and managed to settle her share of mid-game brawls. We wish her well.